Number translation plays very important role in today’s VoIP world by allowing network with different and often conflicting numbering conventions to communicate. In ideal world there would be only one numbering standard, and everybody would adhere to it, but unfortunately this is not the case in real world.

Even as long as plain old PSTN is considered, almost each country has its own incompatible standards for dialing local, long distance and international numbers. Over the years people got used to it, so that any VoIP provider who wants to provide services to customers in different countries will face the need to somehow compensate for those differences and provide consistent numbering plan in the system, still letting users dial numbers in the way they have used to.

Just like users, many VoIP carriers for various reasons require from their customers to send calls to them using some “weird” numbering plans (country-specific plans, technical prefixes, etc). To allow dealing with all those real-world scenarios, the Switch provides flexible number translation mechanism, whose task is to compensate for difference in dialing habits of individual users and allow adhering with Vendor’s requirements. The diagram below illustrates how different CLD number translations are applied during a typical call. 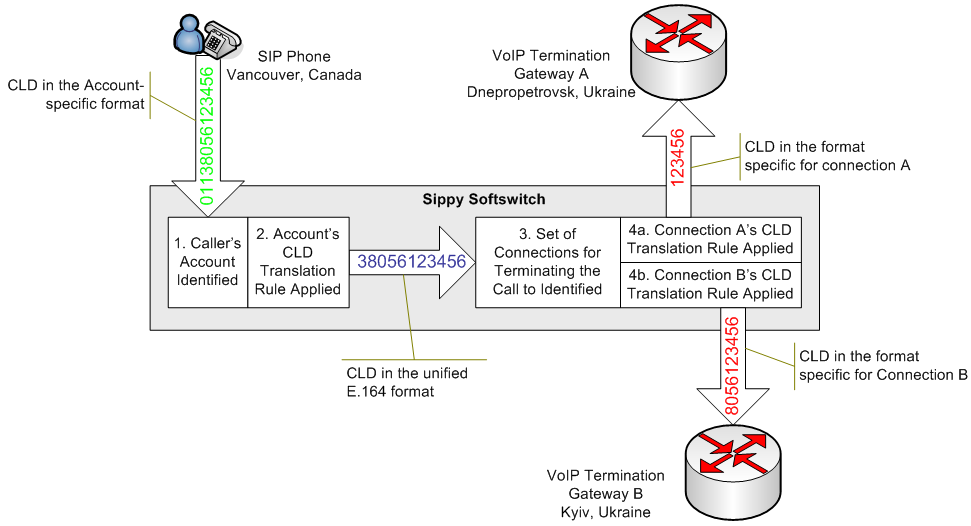 The Switch is built with assumption that all numbers inside the system are in the E.164 format, that is, country code followed by the area code followed by the local number followed by the optional extension number. However, as previous section explains in the real world the calls will be coming in some user-specific, which needs to be converted into E.164 and also Vendors are likely to expect some different format of CLDs sent to them.

For the purpose of doing Account-specific to E.164 and then E.164 to Vendor-specific conversions the system provides three different features allowing translating called or calling number at different stages of the call propagation through the switch. There are 6 basic types of number translation available in the Switch:

Translation rules are specified either as the replacement numbers or as a set of regular expressions with Python syntax in the following two forms:

The former will match/replace a single matched occurrence or pattern, while the former – all of them. Several expressions may be used in one translation rule; in this case they need to be separated by semicolon (“;”).

For example the following translation rule can be used to strip leading 011 prefix from the number:

While the next rule will result in the number replaced with 123456 in all cases unconditionally.

Translate all non 10 digits CLIs into the new one, and bypass the CLIs with another length

Exclude + from the front of the number

Indicate space in number and set prefix BLOCK(or any other prefix):

Indicate space in number and remove it:

To get the translated number with some constant prefix and the body with the numbers from some range: